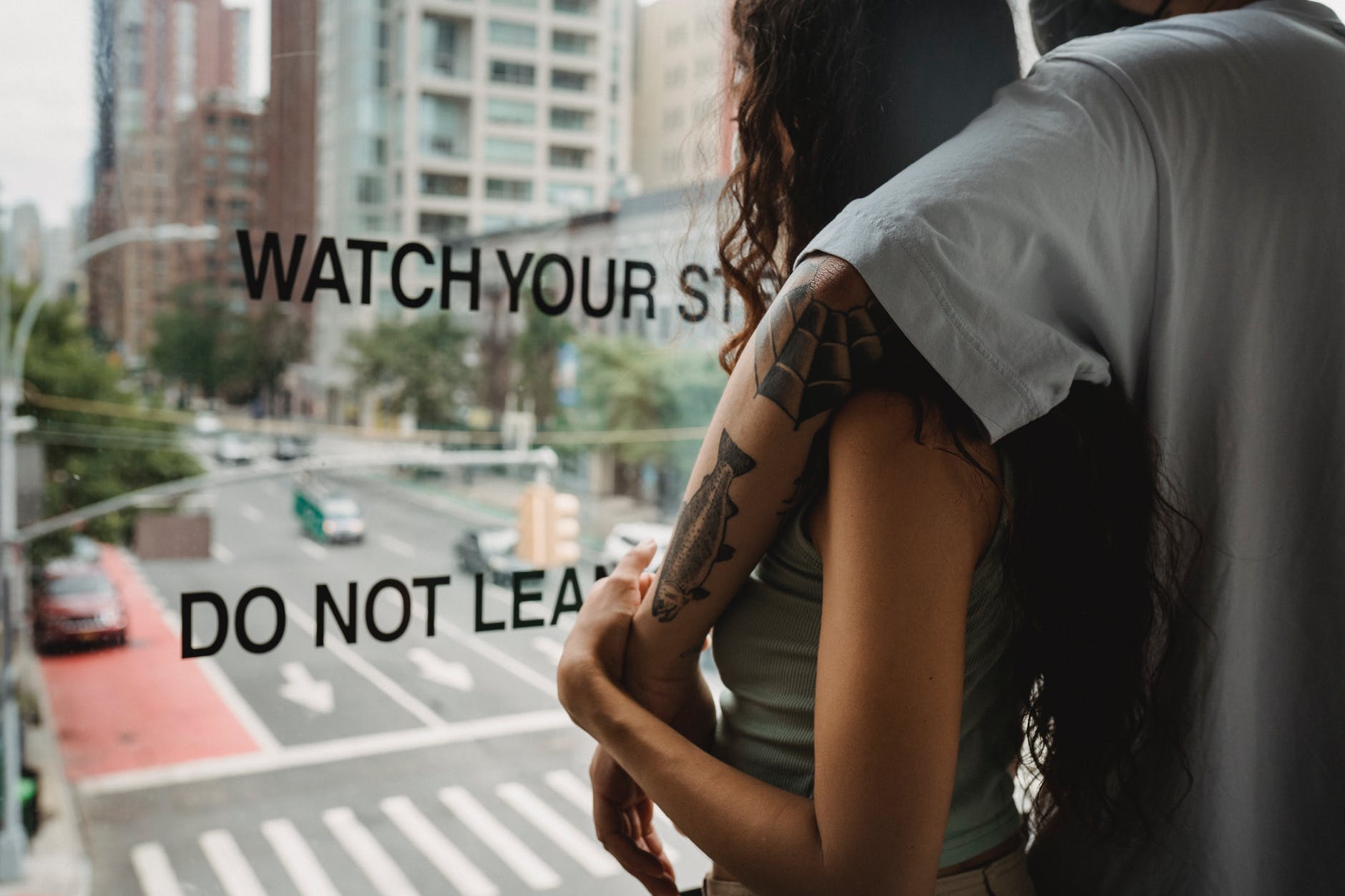 We had gotten into an argument that night, I can’t remember exactly what about. But I do remember walking out of the living room to sit on the balcony because, if you know me by now, you know I am great at panicking and fleeing the scene when things get too heated for my body – mind combo to handle.

I sat there for a little while. Hymning and hawing over whatever it was that was causing us so much stress that we were unable to meet each other in the middle. I sent him a text message which read something to the effect of “it’s really unfortunate the night has to end like this.” It may have been more bratty and less graceful than that. But whatever it was, was enough to get him off the couch and on to the balcony. He shut the screen door and took a seat in the rocker [1] on the opposite side, facing me.

We shared a few choice words, and got more frustrated as one came after the other. Claim, rebuttal, claim, rebuttal. Until there was a mutual tap out for one brief moment. I used it to take in a breath of the summer night air.

He, on the other hand, used his pause to conjure up what I am not sure was the claim or the rebuttal, but either way it hit me like a brick-fucking-wall.

He said in a very intentional yet serious way, “why is it so damn hard for you to believe there could be someone out there that wants to try and love you long enough to understand you?”

When he said that I almost fell out of my goddamn rocker. [2] I knew at that moment it was over.

That’s always been something he is particularly great at, whipping out extremely profound and intentional thoughts that cut straight to my core, but at the utmost inconvenient of times.

After I processed what had just happened and picked my jaw up off the floor, I knew I had two options. Throw up my white flag in surrender or walk the plank. Jump ship right off that balcony and never look back.

I chose not too flee that time. Because I immediately knew he was right. And I was so touched by the depth and power of what he was implying that I didn’t even know what to do with myself.

Me to me: this man seriously wants to embrace every single quirk and malfunction until he knows every detail by heart? Impossible.

I mean I hope it’s not impossible. But does he know what he’s signing up for? Because I think it’s going to either take the exact right tools or it’s gonna take forever and a day, which is a very long time to wait. That’s a very lofty goal.

Now if I was to blame someone else for why my stubborn mind can be so impossible to reckon with, which I don’t but I will anecdotally to spice up the content of this post, it’d be my grandmother. Who is singlehandedly, no questions asked, no runners up, ASK ANYONE — the most amazing lady you will ever meet. You could even ask Nigel Hayes, because she refused to leave Ian’s Pizza one night without going up to Nigel first, a Nigel who was in full on incognito mode, hoodie up head down waiting in line for a slice.

Gram noticed him as we were leaving, she says “I’ll be right back.” We watched her little 5’5 frame walk up and tap him on his 6’8 shoulder. She put her hand on her heart and exclaimed, “Oh Nigel it’s so lovely to meet you. I just wanted to say that I love watching you play with the Badgers. You’re such a talented athlete.” From what I could tell Nigel was dumbfounded and caught off guard, but knowing a little more about his character after watching the post game press conferences, I’m pretty sure he would vouch for grandma Janet’s magic effect, even if you wanted nobody to know where you were or what you were doing. Even if all you wanted was a slice of pizza and a break from being a college athlete for a minute, you would sure hope that lady notices you and insists on saying making the introduction before moving on to the next venue.

If the above wasn’t enough to sell you on my arbitrary argument, the best way I can of think to finish describing her for you, is two adjectives, a couple more follow up statements and one direct quote. I didn’t even have to write it down because it has literally sat etched in my brain, verbatim, for god knows how long ever since it left her larynx.

My grandma Janet is nothing but sunshine and firecrackers.

A stubborn, spitfire of a women, with a work ethic that always burned the candle at both ends and a heart that wouldn’t hurt a fly. In fact, she wouldn’t hurt a fly, she’d use a fly. I wouldn’t be surprised if it was her sorcery that put that fly right on Mike Pence’s head during the VP debate!

She never gives herself any credit for all of the amazing things she is, and does on a daily basis. In fact, she’s very good at self-deprecating, but that’s her way of saying she could have done better. My grandma is a woman who holds herself to very high standards.

The one and only time I remember her ALMOST bragging about one of her many skills is captured by the following quote.

She said, “I’m a pretty good chef, a damn good cleaning lady and I can ripen a pear to perfection. Write it on my tombstone!”

Even though she’s going to live forever, you best believe that quote is going on her tombstone. And if you ever have the pleasure of meeting my gram, word of advice, ask to try one of those goddamn pears. (Pure sorcery).

Anyway, now that you understand my gram, maybe you will understand where the reluctance (inability) to hand over the reigns and let someone else drive for a bit comes from. What I mean by that, and I’m sure he could attest to as well, I can be a tough nut to crack. I know that my stubborn ways have to do with some of our arguments. Luckily, Julian is really good at giving me perspective when my brain is malfunctioning and needs a reboot.

Back to the balcony scene.

Excuse me, what? You want to do what now? I literally went silent for I have no idea how long but it felt like forever.

*mind racing, cortisol levels preparing for take off, risk and reward pathways firing on all cylinders*

Me to me: was that a jab at my emotional intelligence? Was that the sweetest thing you’ve ever said to me? Excuse me, WHAT?

I don’t think I was able to come up with these exact words on the spot due to the magnitude of what he had just said meant to me. Because knowing me, if I was choked up and flustered enough during our disagreement (which I always am), I deeeffffinately was in no mind body soul headspace to gracefully express what I was feeling, in the moment, as a result of that unbelievable statement.

So short story long I don’t remember my surrendering thought. But if I was better at thinking on my feet, this is what I would’ve said.

DJ, please queue up TLC’s “Don’t go chasing waterfalls.” Because I need something to listen to while I wait for the flush in my cheeks to fade and some time to make sense of why my heart just grew 10 sizes in 10 minutes.

I don’t know that I will ever come up with the right combination of words to describe the abundance of love I have in my heart for that man. But I do know he is my best friend. I love loving him because he’s taught me a lot about love, loss, family, marriage, divorce, forgiveness, adulthood, resilience, functional and dysfunctional relationships. And over the course of our time together, he has also afforded me a great deal of patience that sometimes I did not earn or deserve.

Anyway. I’ve become a sappy puddle of teary emotion as I sat here and finished writing this one tonight. There are a lot of things I still don’t know, and there are still a whole lot more I’m probably going to have to push a pull door before I figure it out.

But that’s ok, because that’s how growth happens.

References [1] and [2] if you are a young-middle age person with a 80-85 yr old soul that enjoys sitting on your patio while you sip an ice cold Mexican Coke, check out this patio set. 10/10 it will rock your world, tell them Ash sent you. You won’t get a discount or anything but I mean, hey why not?